EXHIBITORS/SPONSORS OF OUR LAST EVENT

This is not a secret, that I’ve been a pinball enthusiast since my age of 5. I think this feeling is one of the greatest contributing factors that have made Budapest Pinball Museum famous domestically and increasingly, abroad, as well.

At Budapest Pinball Museum, our aim is to share some of the most popular arcade games of the 20th century. The space we have for this has now been nearly outgrown. I’ve been having the urge for a while now to provide a bigger picture of the arcade scene for both the younger and for the somewhat older. I want to share with everyone how it felt (and what a big deal it was that time) playing quartz games, or tabletop arcade games under the school desks. Many of those players have been seeking for the experience ever since. In my observation, these experiences are still alive in ourselves, what we need is a little spark to bring them out.

We remember how it felt to launch a proton torpedo into the thermal exhaust port of the Death Star, leading the X-wing squadron (Star Wars, 1983), or to fight horrible space phoenixes who were obtaining new lives from their ashes or hatching themselves from their own eggs at an increasing speed during the game (Phoenix, 1980). In my experience, we can relive our childhood with all these time machines. A different age which in a sense was, well, if not neccessarily better or worse, but maybe a bit slower and more naive, where you could tell ‘virtual’ apart from ‘reality’. (also there was snow in December :). 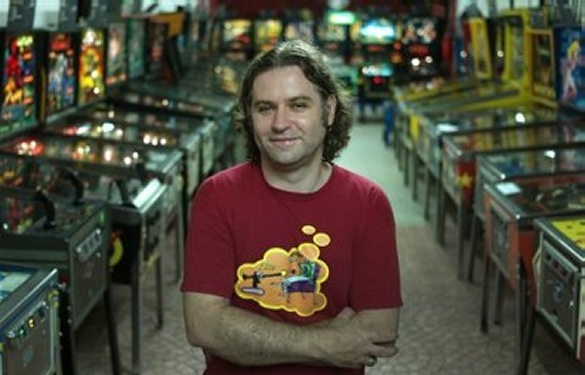 Gábor “SakmaN” Szakács is of the old school. He grew up together with video gaming industry, he confesses. He was in elementary school when first Pong machines appeared in Hungary. It was love at first sight for him. From then on, he was throwing his pocket money into the arcade machines of suburbian Budapest. As a teenager, he also exploited every opportunity to embrace his geekness when playing at friends and classmates. Then he got involved even more profoundly in the subject, working 8 years at a gaming magazine. Ha started collecting seriously back in 2005. His collection consists mainly of PC consoles, video and handheld games. His favourite manufacturer is SEGA.

He’s one of the few to share his items with the great public on a regular basis. The first occasion was in 2009 in legeandary Csokonay Community Centre (a.k.a. Csoki). Ever since then, ReGamEx shows (retro video and quartz game exhibitions) have taken place each year. Gábor is a regular at various gamer shows and as well as private events and receives great feedbacks at these.

He’ll arrive to Arcadia with his extended ‘travel kit’, legendary PC and video consoles (Nintendo, SEGA, Atari, Commodore, Enterprise, Sinclair, Coleco, Videoton, stb.), all of them in good condition and and ready to use! A smaller exhibition will also be available, showcasing the ‘real treasured items’. 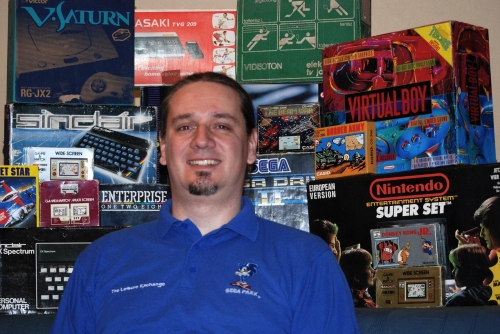 Viktor is a dedicated gamer since the age of 6, his first PC was a Commodore 64 inherited from his grandfather. His passion for gaming had started with ‘The last ninja’ and as a child he’d spend all his pocket money on “Cadillacs and Dinosaurs”, “Robocop” and the like at local arcades.

Thanks to a console rent store that had opened in his neighbourhood, he’d also had access to all Sega Nintendo and Playstation games in his neighbourhood. His favourite style is Beat’em up. He purchased his first own console, a Sega Dreamcast back in 1999, then he collected all games in existence ever since.

He started collecting retro consoles by purchasing SEGA Mega Drive then Super Nintendo and Playstation 1. By today this collection is completed with pinball and arcade video machines. His collection includes rarities widely acknowledged by all retro nerds. To Arcadia, he’s bringing mainly exceptional items, however his Neo-Geo, Nintendo, Sega and Panasonic consoles will also be available for playing.

In my youth in the 90’s I have played pinball mainly in the cinema, because this was one of the few locations where pinball machines have been set up in our little town, while the cinema was closed.

Around a decade ago it came into my mind that it is also possible to buy a pinball machine for home, to have the opportunity again to enjoy these games.
So it happened that I bought my 1st machine (a Buck Rogers) and at the same time I bought a second machine (Williams Cyclone), because it is much more fun to have more games available for playing.
This was the time when the love for pinball really shifted and now there are more than 30 older pinball machines in my collection from the mid 80’s up to now.

In 2015 I decided to found RS-Pinball e.U. and to make a job out of the hobby. So RS-Pinball e.U. operates, repairs and rents pinball machines to get them to the enthusiasts. We also organize and support different Pinball tournaments.
Our customers can buy new pinballs from Heighway Pinball, Stern Pinball and Jersey Jack Pinball as well as different modding and spare part articles because we are partner of Superfluxxer LED from Germany, Playfieldprotectors.com from Germany and Pinsound from France.
All this products can be tested and enjoyed in the showroom of RS-Pinball e.U. in Vöcklabruck which is halfway between Salzburg and Linz. Contact and visit us if you have time www.rs-pinball.at

“Some people are pinball lovers from the very beginning, some only encounter them later in their lives. When I was a young boy, I wasn’t really enthusiastic about this machines, it was only later, in my adult life that my professional occupation lead me to them. As from 1991, a lot of pinball machines started to flood into Hungary and they required permanent maintenance. Two years later I started to lease darts machines and pinballs.
A renewed pinball is not simply a piece of art, but it is also fun to play with.”
His company offers pinballs, darts machines, arcade video games, typhoon tables, foosball, and box machines also for corporate parties and other events. They have more than 20 kinds of oinball to offer, among others: Star Wars, Indiana Jones, Monster Bash, Scared Stiff, Addams Family, Twilight Zone, Terminator 2, Lord of the Rings. Further info: flipperberles.hu

One of the curiosities of Arcadia will be Futu-Retro Magazin’s Game Boy Museum (owner: Sándor László Veres). On the top of consoles, nearly 700 casettes and games accessories will also be present at the stand.

At the  Game Boy Museum visitors can have a go on each console and choose any of the casettes. This is how Futu-Retro wishes to keep the “grey brick’s” memory alive. Apart from Game Boy’s, this retro collection also includes SEGA consoles and Playstations, as well.

Super Pinball was founded by pinball daredevils Zsolt Csiszka and Péter Boncza in order to distribute US manufacturer Jersey Jack’s pinballs. Thanks to them, all machines by awesome Jersey Jack Pinball will be deployed at Arcadia!
Four at a time: Pirates of the Caribbean, Dialed In!, and The Hobbit and Willy Wonka will all move in! You don’t have to be a Johnny Depp fan to fully enjoy the scenes of the pirate blockbuster movie or tech-savvy to appreciate the Bluetooth®, camera or smartphone features of Dialed In! Simply immerse in the creative magic of the contemporary pinball wizard Jack Guileri, and allow the timeless freedom lift you up! Of course, if you’re also a Lord of the Rings or a Hobbit fan, you will particularly enjoy the third machine! 🙂 The fourth one, Willy Wonka is based on the original movie from 1971, starring Gene Wilder.

Aside from the encounter with your Inner Child, the most important thing at Arcadia is that you simply feel good. We are sure that one needs no extra fuel to achieve this, however, thanks to our sponsors, a little extra motivation will also be available.

Menu
Menu
We use cookies to ensure that we give you the best experience on our website. If you continue to use this site we will assume that you are happy with it.Ok